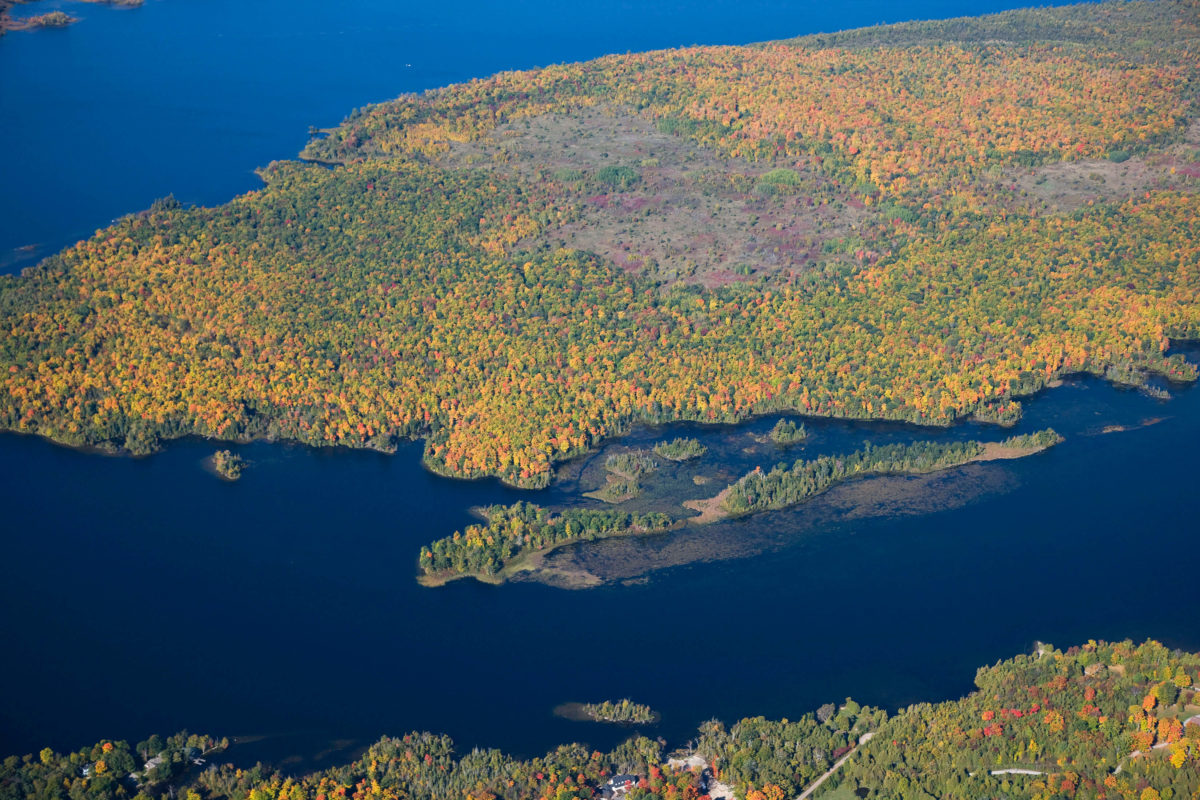 Maybe you’ve seen the island from the mainland shoreline on Pigeon Lake, or perhaps you’ve canoed or boated there for an afternoon of hiking amid the almost incandescent greenery of the forests on a sunny day.

Since main donation of the island in 2015 by Mike and Terry Wilson, Kawartha Land Trust has held a number of events on the island including species at risk surveys, shoreline garbage cleanup days, wilderness basics training, guided hikes and paddles, pollinator exploration and much more. Today, the island remains a popular summer destination in the Kawarthas.

Take a moment today, to learn a little more about this beloved island.

Twenty years ago, when Kawartha Land Trust was founded as the Kawartha Heritage Conservancy, Big (Boyd/Chiminis) Island was very close to being divided up into lots for cottages. As the largest undeveloped island in the Kawarthas, the property was considered prime real estate. The possibility of the island being developed was so close to coming true that test holes had been dug for wells.

At over 1,140 acres and home to wetlands, diverse forests, small off-shore islands, and a wide variety of plant and wildlife species, it would have been a tragedy to lose this unique land to development.

Fortunately for the environment and the species on the island, by 2015, it’s new owner, Mike and Terry Wilson, entered into discussions with Kawartha Land Trust on how to conserve the island and protect it. That year, the Wilsons donated an incredible 95% of the island to KLT; however, a one million-dollar stewardship fund needed to be established in order for KLT to accept the donation of the island.

The stewardship fund would ensure that the island could be maintained and protected in perpetuity. A community fundraising campaign — a first for Kawartha Land Trust — was launched in an effort to protect the island and continue to make it available for public use. Within a very short period of time, and with thanks to donors and supporters of the project, the island was saved from future development.

The stewardship fund was not the only unique approach used by KLT when it came to protecting Big (Boyd/Chiminis) Island. KLT established a special Management Advisory Committee to guide decisions regarding stewardship planning, operations, and outreach and communications related to the island. The team was comprised of KLT staff, community leaders, First Nations representatives, individuals who had been key in the fundraising campaign, and local residents who had enjoyed visiting the island for years.

The Committee communicated with the community to address questions regarding the donation. In May 2016, a public meeting was held in Bobcaygeon to answer questions regarding the island and address usage changes, including why fires and camping could no longer take place (possible damage to sensitive habitats, restrictions related to the Environment Canada Ecological Gifts Program through which the island was donated, and for liability and risk and insurance limitations). The island would be opened to the public for day use and new docks were established to make it easier for visitors to access the island.

In July 2016, KLT held a large community event at the Bobcaygeon Lock, bringing together project supporters, donors, the Management Advisory Committee, staff, and the community together for cake and ice cream to celebrate the fact that the island would be protected forever.

After KLT’s Big (Boyd/Chiminis) Island’s Management Advisory Committee achieved the goals it had set out, the team disbanded. KLT remains grateful for the hard work and dedication of the team’s members and the supporters and donors that helped KLT protect this incredible island.

The island is currently regularly visited by Kawartha Land Trust’s stewardship team and volunteers who undertake land stewardship activities to maintain trails and preserve habitat. If you see KLT staff and volunteers, be sure to say hello!