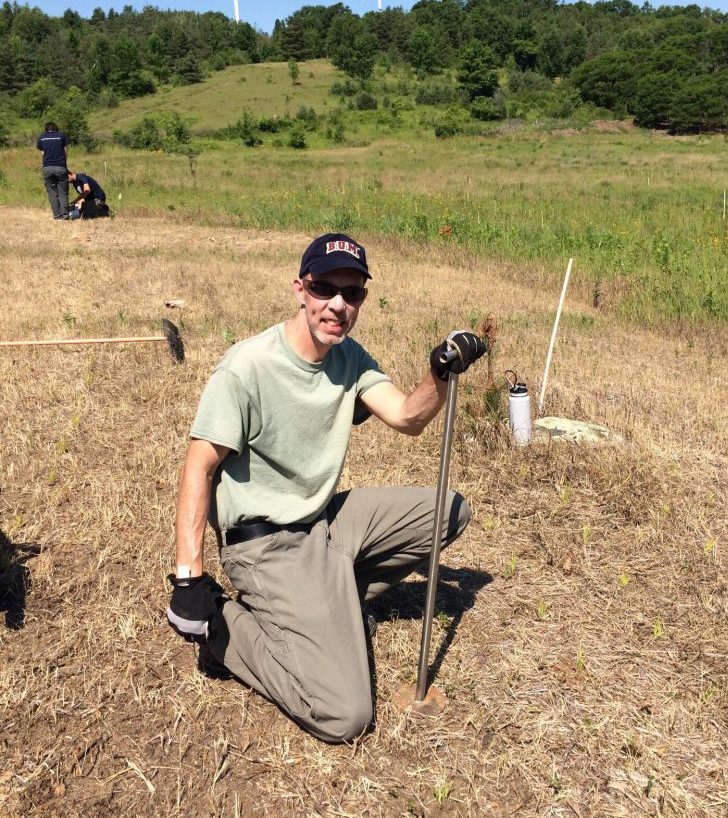 Steve has been a regular presence at many Kawartha Land Trust (KLT) projects and events since his first KLT event, a salamander walk early in 2018.  You likely remember him as the guy with the camera taking tons of photos documenting each location and experience.

“I’ve participated in a wide variety o f events since last summer from helping participate in least bittern surveys, directing traffic, planting native grasses, collecting seeds, removing buckthorn, and taking photos at events,” Steve said. “I find the diversity of opportunities to get involved to be most interesting because you can help out in different areas.” 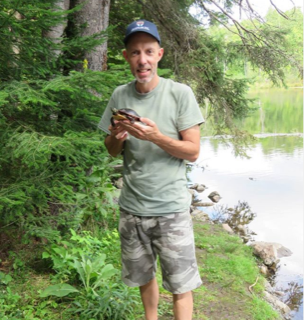 Steve moved to the Peterborough area when he was young, and grew up on a two acre property beside a farm. His appreciation of nature was nurtured at the cottage his family had in the Kawarthas for 25 years.

This appreciation has grown into action… serious action.  For the past two years, he and his wife Laurie have successfully raised Eastern Black Swallowtail caterpillars. This past summer they noticed a lot of Monarch Butterflies. Then in early September on a Peterborough Field Naturalist (PFN) outing, he stopped at a field to show participants the Monarch caterpillars that were in various stages of development.

At the end of the walk, a public works employee came to cut the grass in that same field and could not be persuaded to avoid the areas where the caterpillars were. Steve collected eight caterpillars and brought them home and raised them.

“This involved getting them fresh milkweed every morning and cleaning up a LOT of poop, but it was a wonderful experience and we learned so much,” Steve said.  “Since then I contacted the township to try and raise awareness on the benefits of pollinators and am currently working on several proposals to further establish pollinator pathways in our area.”

Steve and Laurie would love to turn their property into a pollinator paradise and register as an official way station.  They hope to start raising and tagging Monarchs in the next few years.

When he develops an interest, he really embraces it. When he decided to purchase a camera to help motivate him to get outside and get more active, he loved it so much that he began to take what has become thousands of photos to document locations and experience. As his interest has evolved he has tried to become more creative and tried to catch special moments.

“Two of my photos have been recognized over the last two months, one for winning the wildlife category of the KLT’s #TheLandsILove social media contest and the other was chosen as the cover of the September issue of PFN’s Orchid magazine,” he said. “My next step is to upgrade my camera, with a goal to eventually be able to sell prints and raise the money for the various not-for-profits I volunteer with.”

Steve enjoys volunteering with the KLT and says what stands out to him about the organization is how accepting every single member of the KLT family has been toward him, appreciating his passion and making him feel welcome and included even though he does not have a science or environmental studies background.

“I felt an instant connection with the KLT,” he said. “It was a natural fit, just like my involvement with the Ontario Turtle Conservation Centre and the PFN.”

Steve says he has loved every KLT event he has been part of, and the people he has met have helped fuel his passion to be more involved in educating others in the importance of citizen science.

And as an organization, KLT is thrilled Steve has become a volunteer and that his efforts are a big part of what makes KLT such a success—the passion and commitment of the volunteers.

So the next time you’re at an event and you see the guy running around with a camera, be sure to stop Steve and ask him about his butterflies!