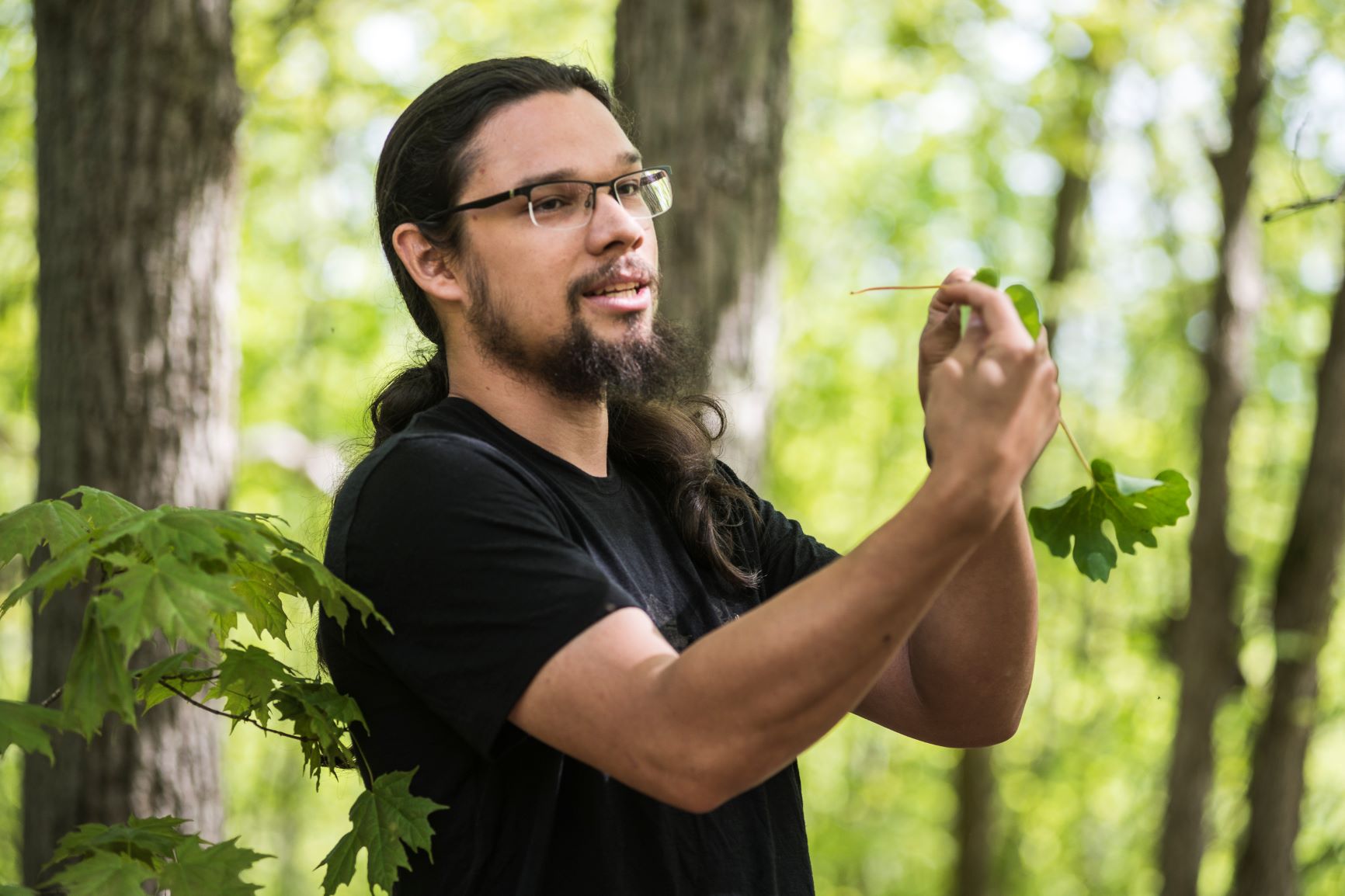 Joe Pitawanakwat, founder and director of indigenous outdoor-education based business Creators Garden, holds a leaf from a bloodroot plant during a guided indigenous medicine walk at Ballyduff Trails, located on the McKim-Garsonnin property protected by Kawartha Land Trust. He explained the use of the highly toxic plant in traditional medicine to help treat fibroids and as an aid for pregnancy. (Photo: Anica James)

“Everything in the forest is speaking to us, showing us what it is used for.”
Kawartha Land Trust Hosts 1st Indigenous Medicine Walk

On Sunday May 26th, roughly 80 people gathered over the course of the day at the Ballyduff Trails for two separate guided indigenous medicine walks, eager to learn about the cultural, medicinal and ecological importance of different native plant species found in the area.

Throughout the day, participants had the chance to look at and learn hands on about different plants found along the trails of the 260-acre McKim-Garsonnin property that is protected by Kawartha Land Trust through a Conservation Easement Agreement.

“Our landscape is waiting for us to come home,” said walk leader Joe Pitawanakwat, founder & director of Creators Garden, an indigenous outdoor-education based business that teaches about the history, philosophy and legitimacy of plant based medicine.

“If we can tap into the world around us, we can be healthy and live in harmony.”

Originally from Manitoulin Island, but now based out of Peterborough, Pitawanakwat, along with his friend Beedahbin Peltier, lead two informative walks over the course of the day. Both men have helped design indigenous perspective curriculums for colleges and universities and continue to actively educate the general public about plant-based medicine and sustainable harvesting of plants. 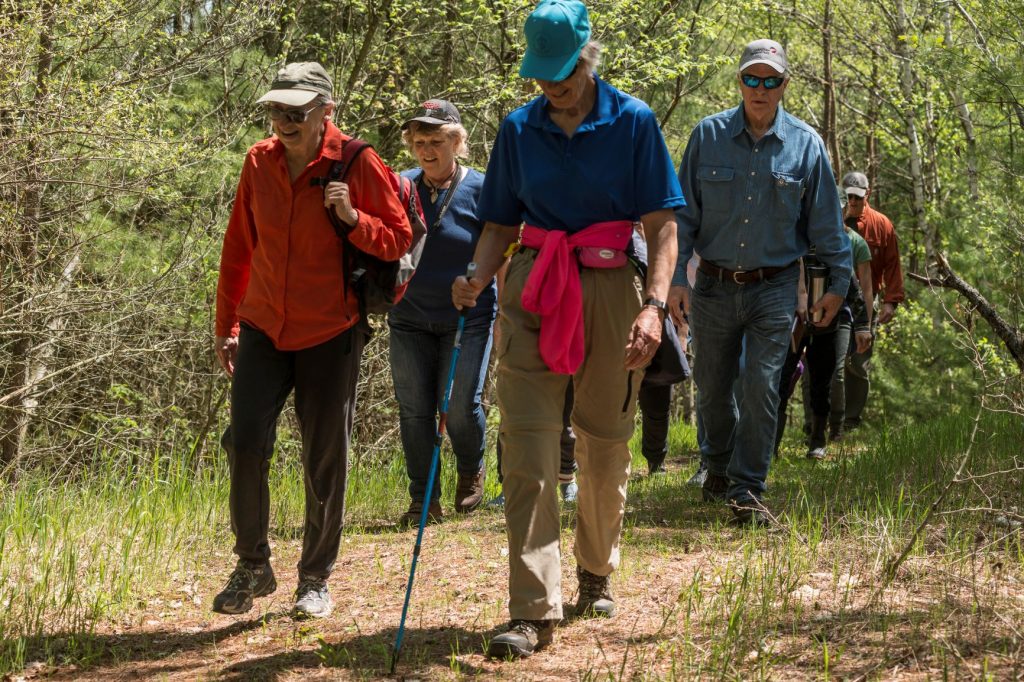 The first group set off on the 3 km long red trail, where they learned about different kinds of plants and their medicinal uses. Property owner Jean Garsonnin joined the morning walk. She and her husband Ralph McKim have owned the extensive property since 1986 and have done an exceptional job at restoring the land and it’s ecosystems, turning it into a nature lover’s delight. Located on the Oak Ridges Moraine near Pontypool, the Ballyduff Trails lead hikers through different kinds of environments that included rolling hills, cedar forests, tall grass prairie, mixed forests, and wetland areas.

Holding up a leaf from a bloodroot (Sanguinaria canadensis) plant, Pitawanakwat explains to the group the significance of the highly toxic plant for traditional medicine. “When you look at the leaf, which body part does this remind you of?” After a few unsuccessful guesses from the group, he went on to explain how bloodroot, known as Mskwiiwjiibik, has been used by midwives as a traditional medicine to help treat fibroids and acts as an aid for pregnancy. “The leaf is the same shape as a uterus, and the blood-red colour of the roots symbolizes, well,” he said with a chuckle. “I think the rest of you can guess what that relates to!” 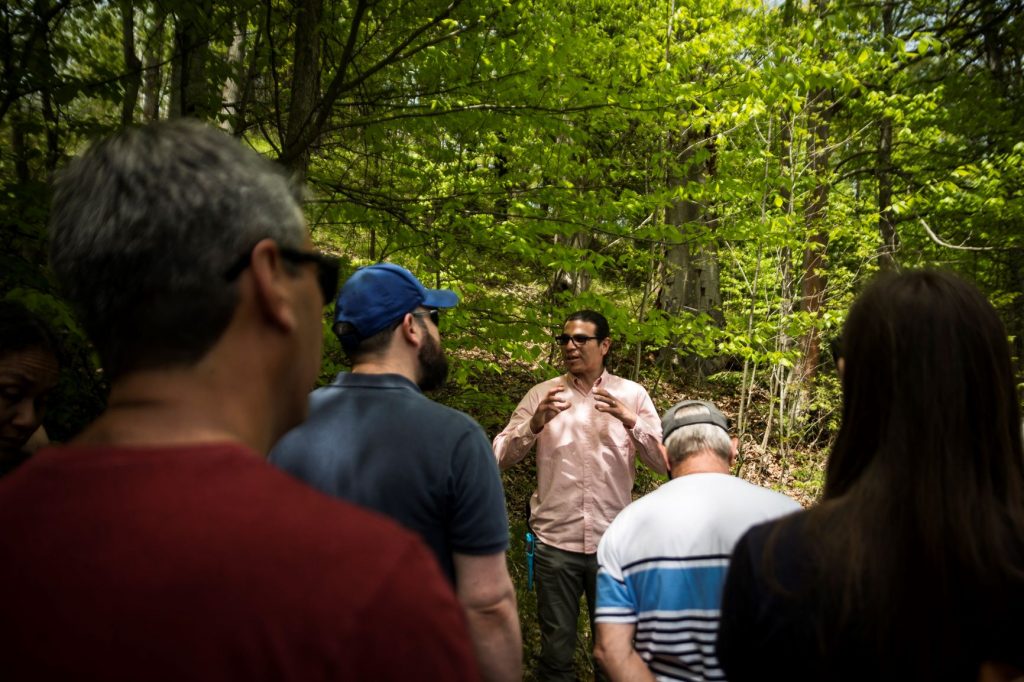 The call of an Eastern Wood-Peewee and the faint whooshing sound of the wind turbines along the hills acted as a musical backdrop to Pitawanakwat’s talk.

“Treat plants as if they are your friends, because they are. Listen to them. Read them. Look at them in depth. Just sit with them and pay attention to them. Every plant is telling a story.”

Moving on, participants were taught that wild violets (Viola spp.) are used for anti-inflammatory purposes, whereas Blue Cohosh (Caulophyllum thalictroides) has been traditionally used for women’s medicine to induce labour and aid in menstruation. The fruit of Mayapples (Podophyllum peltatum) on the other hand can be boiled into a tea and used as a solution to aid in gardening to deter pests, whereas trillium roots can be used for fishing.

“Hepatitis?” One participant piped up.

“Exactly! This plant, known as binezit waabigonii, is used in traditional medicine for the liver. Now who can say it with me: binezit waabigonii.” Participants attempted to repeat the plant name before moving on. 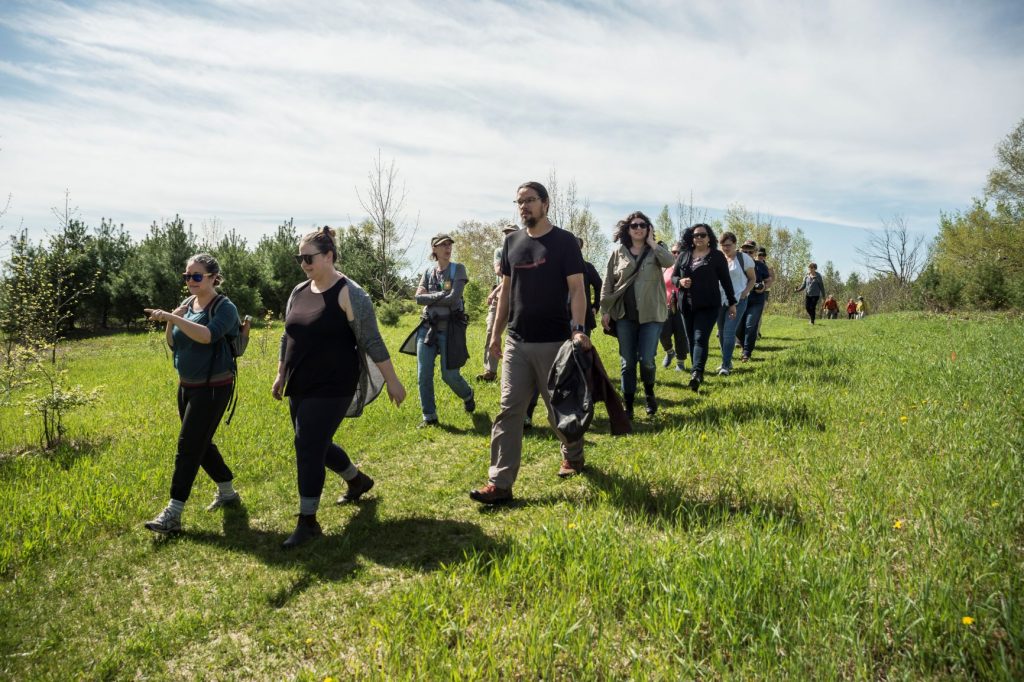 For the afternoon walk, Pitawanakwat lead the second group, which was mostly made up of Fleming and Trent students, to the yellow and orange trails in the “Back 40” area of the property. Stopping next to a beech tree, the group was taught about the mighty Fagus americana, and how indigenous cultures make a tea with the roots of the tree to create a black ink that is traditionally used for tattooing. A scarlet tanager greeted the group with its joyful chorus high up in the beech leaves, which definitely excited some group members as they stopped to photograph the red songbird.

Continuing on the walk, group members got to sample different wild plants along the way such as young basswood leaves, wild leeks, and trout lily leaves. One plant in particular, broadleaf toothwort (Cardamine dipylla), also known as ndapin, seemed to be a hit with the group. Similar in appearance and taste to the non-native and invasive garlic mustard, the plant is used in traditional medicine as an aid for cancer treatment as well as lung problems. Pitawanakwat dug up one of the plants from the ground, and passed the roots around, encouraging everyone to have a taste.

“It tastes kind of like horseradish,” one participant said, making a funny face due to the spiciness of the root. 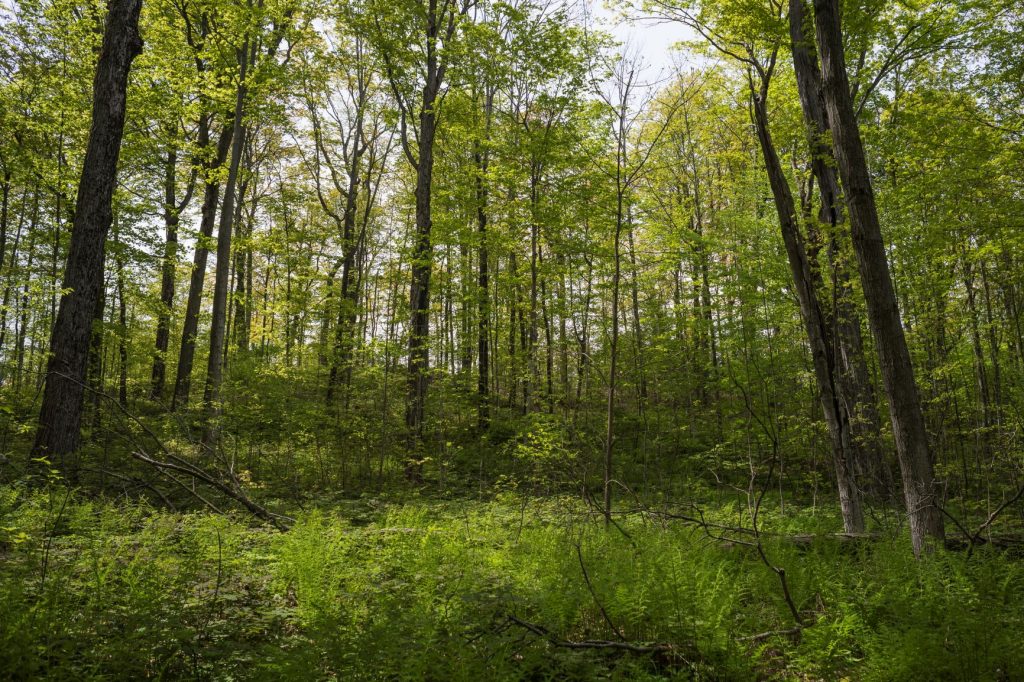 During the remainder of the walk, Pitawanakwat explained to the group about the medicinal uses of miterwort (Mitella diphylla), which is used for earaches, field pussytoes (Antennaria neglecta) that are given to women after childbirth, and wild mint (Mentha canadensis) that is used for treating everything from fevers to toothaches.

“Focus on the values, and the mental, emotional and physical capacities nature has in connection to us,” Peltier said. “We are all connected, just like the roots of the plants and trees surrounding us here. This is what grounds us. When we open up to nature it’s like when we open up to each other: we are all being exposed to something below the surface.”

At the end of each walk, everyone gathered back at the trail head where they had a chance to try four different teas along with a small sample of a medicine that took 48 days to make and was created from 85 different plants. 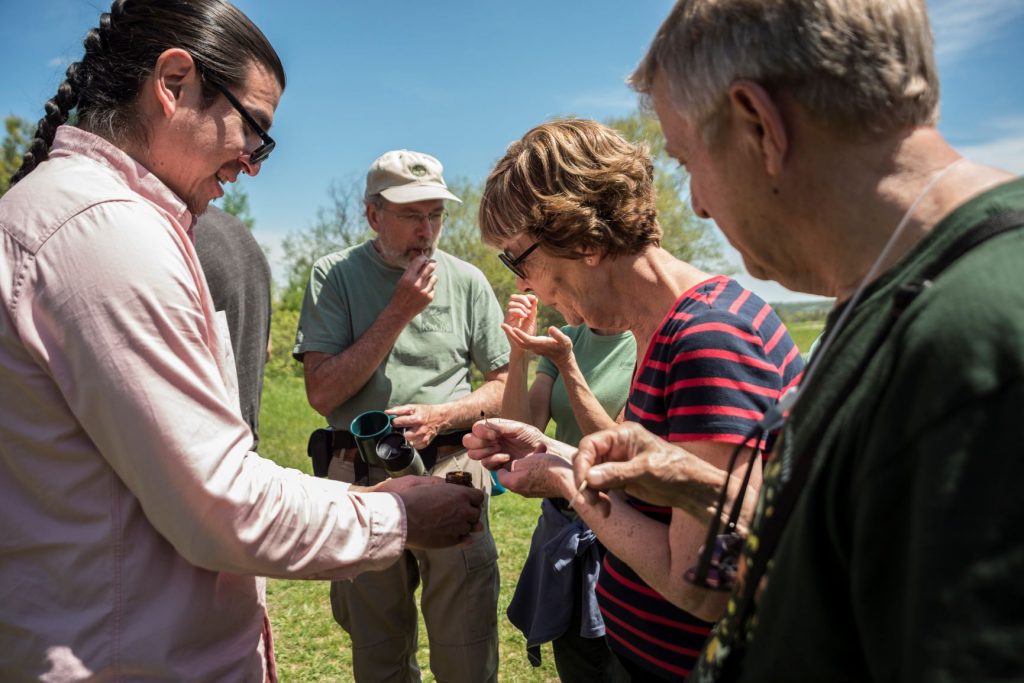 “We don’t often share this medicine because it is sacred to us, but we want to share it with you all today,” said Peltier, a professor of indigenous studies at Fleming College. “Our identities are relationship dependent, with not only ourselves, but with the land and everything that surrounds us naturally. Continue to have a relationship with plants, share the knowledge that you have learned and continue to learn, and make sure that plants continue to thrive for future generations.”

Check out our upcoming events for more opportunities to connect with nature!

The Ontario Trillium Foundation is an agency of the Government of Ontario, and one of Canada’a leading granting foundations. OTF awarded more than $120 million to some 700 projects last year to build healthy and vibrant communities in Ontario.