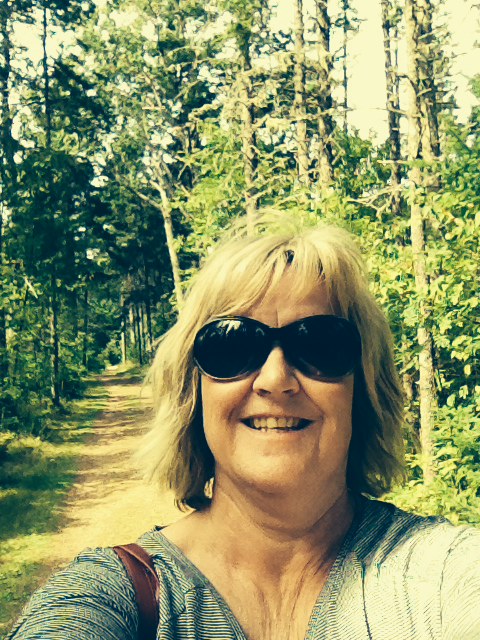 For this edition of Volunteer Spotlight we decided to ‘turn the spotlight around’ and feature the dedicated volunteer who is typically the one behind them, Marnie Clement!

Since her retirement five years ago Marnie has kept busy through becoming a valuable volunteer with Kawartha Land Trust, and developing a love for making beaded jewelry and which she sells on Etsy.

“When I’m not making jewelry I like to follow my 20 year old son around while he looks at all the birds and plants,” she said. “Fortunately his curiosity slows him down so it’s not too hard to keep up!”

Marnie became involved with KLT through the many volunteers she knew and because she wanted to find opportunities post-retirement to continue writing and working in the communications field.

Marnie first began her career in journalism and communications in 1977 when she graduated from the journalism program at Niagara College. She worked as a reporter for the Niagara Falls Review until 1981 when she joined the Ontario Government as a Communications Specialist.

For the remainder of her career Marnie stayed with the Ontario Government including relocating with her family in 1996 when the Ministry of Natural Resources moved to Peterborough, which Marnie described as “the perfect opportunity to escape Toronto!” She worked for five Provincial Ministries and one Federal Department up until her retirement.

Marnie is involved with KLT because she believes saving significant areas of land is necessary work.

“The KLT is so well run, so professional, and saving irreplaceable parcels of land is so important” she said. “While at MNR I was the communications planner for Lands for Life, a provincial process that increased Ontario’s amount of protected land to 12 per cent, which was an international goal at that time.  That got me interested in the idea of permanently protecting land before it’s too late.”

“I love the KLT staff and volunteers. I’ve met so many amazing people who are associated with this organization” she said.

She knows the work that KLT does is vital through her own experiences and relationship with land conservation.

“I spent a year working on the Panel for the Future of the Trent Severn Waterway. During that time one of the big issues we heard about was shoreline hardening and loss of wetlands” she said. “I love that the KLT is an organization that cares about protecting wetlands and rehabilitating areas so they once again can be areas where nature thrives.”

Marnie shared that her favourite moment working with KLT (this far) was falling out of a kayak in late April while out with fellow volunteers as well as many people she did not know. She said that although it was not great at the time, it’s definitely given her something to talk about!

Thank you Marnie for all the work you do with KLT and for allowing us to turn the spotlight around and shine it on you this month!