Inspiring the Next Generation of Stewards! 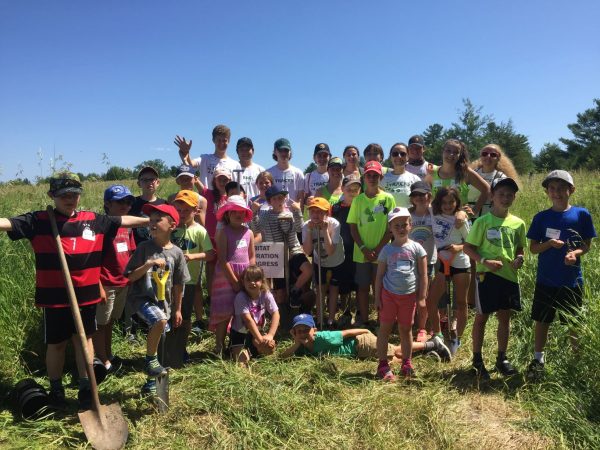 Inspiring the Next Generation of Stewards: Youth Camp Partnerships with Kawartha Land Trust

This summer, Kawartha Land Trust had the exciting opportunity to partner with two youth based camps, ME to WE Camp & Trent Aboriginal Cultural Knowledge & Science (TRACKS) Camp. Throughout the month of July, KLT provided unique hands-on learning experiences that ranged from native Tall Grass prairie plug planting to property clean-ups and trail maintenance. The youth campers were educated on the importance of conservation and land stewardship and learned hands-on the threats that effect our environment including climate change, urban development, invasive species & political challenges.

The ME to WE camp is a youth leadership camp that focuses on providing campers with the skills necessary to enact change in their communities and make a difference. As a part of the camp curriculum, Campers participate in a ‘Take Action Day’ which provides them with the opportunity to work with a local organization for the day in order to learn about a field they are interested in such as social justice, environmental, activism and more!

TRACKS camp is a youth camp that delivers culturally relevant programming that combines both Indigenous and Western sciences to address complex environmental issues. As part of the camp curriculum, students have the opportunity to learn in an outdoor environment with interactive workshops and field trips.

Campers from both the TRACKS and WE Camps had the opportunity to learn about the globally rare Tall Grass Prairie ecosystem at KLT’s managed John Earle Chase Memorial Park. The Tall Grass Prairie ecosystem, which once existed in abundance across Canada pre-settlement now makes up less than 1% of our landscape in isolated pockets. These ecosystems are important because they host a variety of rare plant species only found in prairie conditions and promote biodiversity as they are home to a variety of native species such as birds, butterflies, insects and more!

In the past, Indigenous peoples helped to manage this rare and important ecosystem with the use of fire to keep forests from succeeding in. The Me to We campers and the TRACKS campers both were able to experience first-hand the stewardship work that needs to happen for this ecosystem to thrive, including assisting in the planting of pollinator plants and Tall Grass Prairie plugs on the property.

Day Campers at the Ballyduff Trails

Campers joined KLT for another day of fun in the sun at the Ballyduff trails! On this property campers helped in planting Tall Grass Prairie plugs and helping to continue the expansion of the Tall Grass Prairie plantation. After planting, campers had the opportunity to explore the property and to participate in a guided group hike where they learned about invasive species such as Dog Strangling Vine and European Buckthorn and how they effect the biodiversity and overall productivity of an ecosystem!

Over two separate days, two different groups  of campers assisted KLT staff and volunteers with cleaning up garbage and debris around the site of the old house as well as transplanting native shrubs to the disturbed site. Campers learned about the importance of planting native species in open disturbed sites to help prevent unwanted non-native species from growing in and to help enhance the flora in the area and increase biodiversity. Through this they were able to learn firsthand about how much time and work goes into protecting land, cleaning up and re-naturalizing areas.

The Kawartha Land Trust staff and volunteers had a wonderful time educating and inspiring the next generation of land stewards during our summer camp partnerships! Thanks campers for being Conservation Heroes!