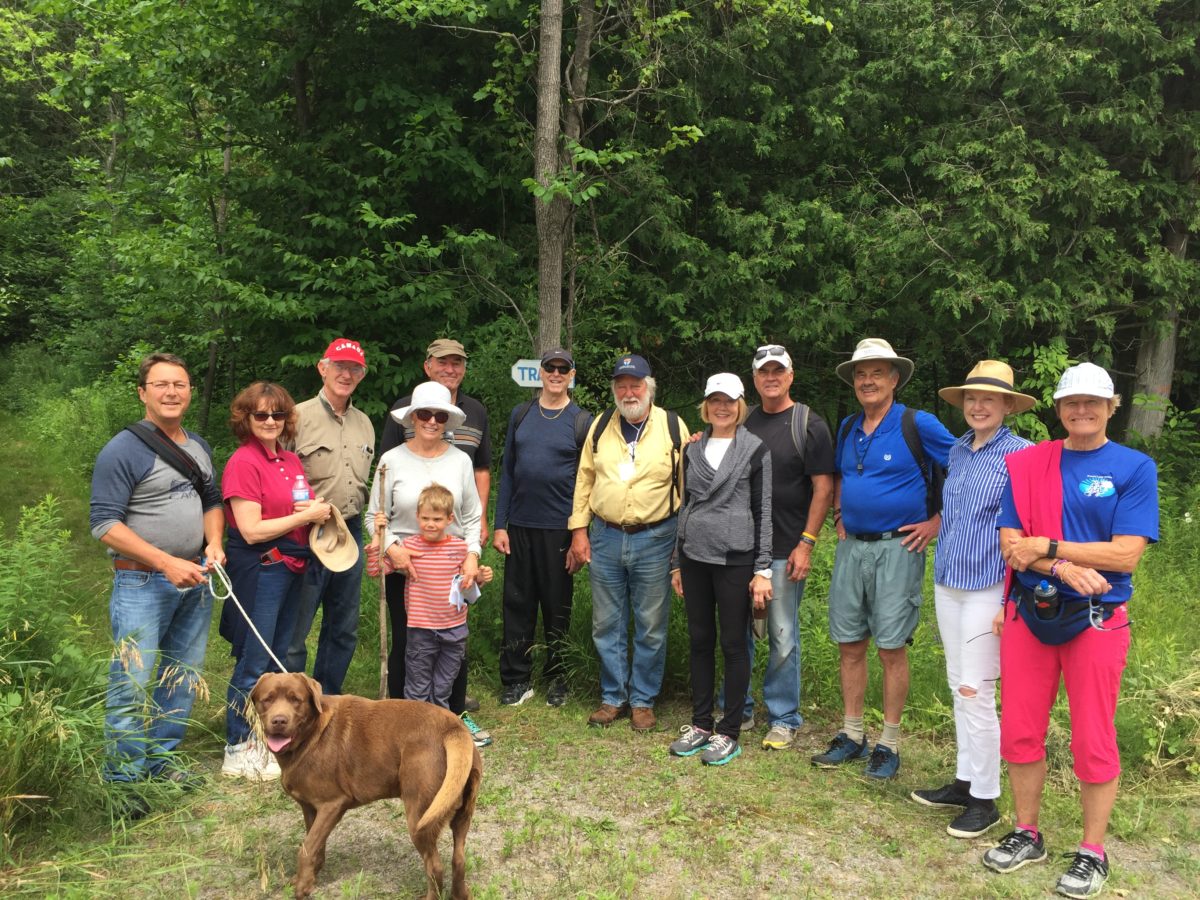 They arrived by land and sea—well, not quite by sea, but certainly by lake. Regardless of whether they chose to drive, boat or hike to the event, approximately 60 participants came out Saturday, July 8th to celebrate the first anniversary of the Kawartha Land Trust’s Stony Lake Trails network.

Watch our video collage of the event:

The 10-kilometer network opened in July 2016 and provides moderate to intermediate hiking experiences through the unique geology that makes the Stony Lake area ecologically significant and naturally beautiful.

The anniversary celebration began at 10:30 a.m. in the parking lot at 105 Reid’s Road. KLT Executive Director Mike Hendren welcomed the group and described the significance of the network, how important it is to KLT and thanked those who made the network possible both in time, land and donations.

Mike introduced Ralph Ingleton who originally provided the inspiration for the network. Ralph welcomed everyone and talked about his support for KLT, the trail system and the uniqueness of this area which is part of ‘The Land Between’. Ralph had personally asked Stony Lake cottager Annie Huyke, 16, to perform a song at the celebration. She chose a piece about bird songs that blended beautifully with the natural setting. 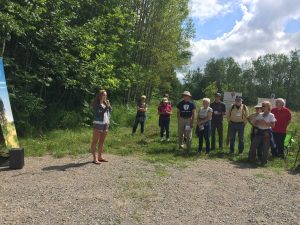 KLT Stewardship Coordinator, Thom Unrau briefly talked about the nature found along the trails, then described guided walks that were being offered following the official portion of the celebration. Participants broke into three groups and followed hike leaders Thom, Ralph Ingleton and Jeremy Carver down the trails to learn about the natural features and human history in the area. 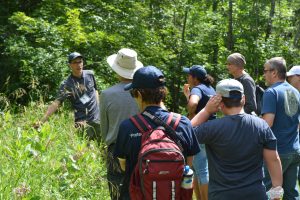 Those who went on the walks came back with a new appreciation for the region and many said they had learned something new. Jason Smyrlis, who was part of Thom’s group, said he found it interesting that woodpeckers have spores on their bills that help them break down the wood. Marlys Kerkman, who was part of Ralph’s tour, learned that there were three kinds of ferns in a small six foot square area.

“There were sensitive, bracken and mixed woodland fern,” Marlys said. “The type of fern depends on the water available in such a small area.”

The well-marked trail network is divided into three sections. The Yellow Trail passes through the Ingleton-Wells property and connects with the Red Trail that runs through the nearby Jeffrey-Cowan Forest preserve. The Blue Trail is on the property belonging to the Viamede Resort. Parking is available at both Viamede and at 105 Reid’s Road. 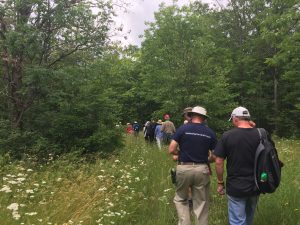 The Stony Lake Trails Network provides one of the most significant connected corridors available to the public in the region. It winds through wildflower meadows, forests, limestone cliffs and significant outcrops of the Canadian Shield. The Jeffrey-Cowan Forest Preserve at the east end of the trail boasts scenic views from the highest point around Stony Lake. Along with a wide variety of birds, hikers can often see beaver and deer.

The trails are open to the public year-round thanks to the support of the dedicated donors and volunteers who spend many hours maintaining the trails and ensuring all the signs are in place so that people using the trail always know where they are. 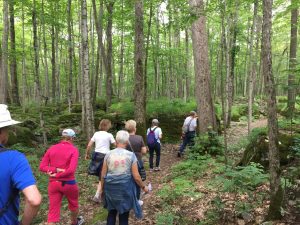 On behalf of everyone at KLT, “I would like to thank the volunteers who assisted with this event, from the initial planning, figuring out the logistics, inviting friends, family and neighbours, and those who helped on the day of, it was you who made the Stony Lake Trail 1-Year Anniversary Celebration a success! Thank you!”  Tara King, KLT Development Coordinator.