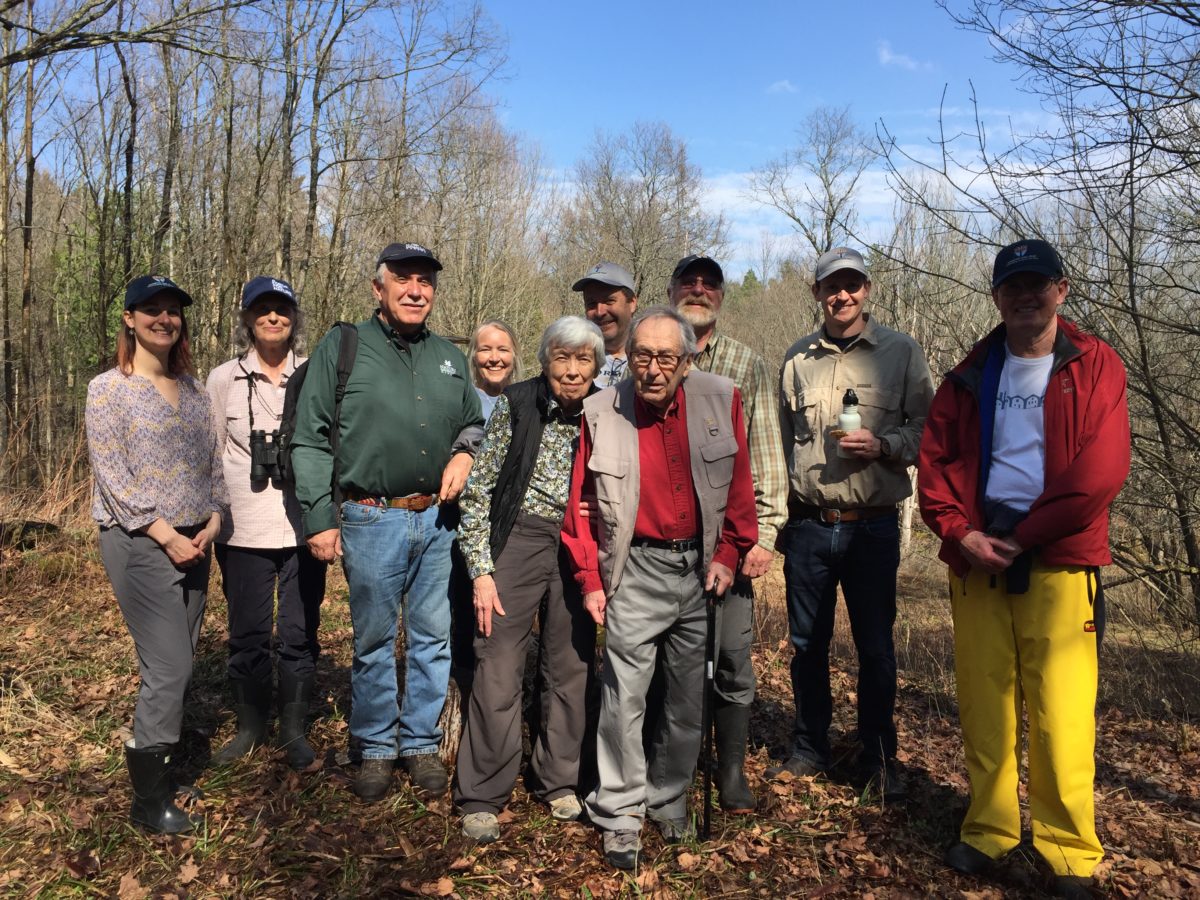 Friday May 4th, 2018 – we celebrated the generous gift from Bruce and Ann Falls, who donated their property to the Kawartha Land Trust to protect the land they love in perpetuity.

With heavy rains in the forecast, we were pleasantly surprised that the weather held off as we made our way to the small cabin in the woods, not too far from Coe Hill, Ontario. There’s something about being in the woods on an overcast, misty day that is simply magical!

We hope that you enjoy these videos and photos from the event:

Watch this wonderful video with Bruce and Ann Falls and the stunning KLT protected Falls Property:

*Please note this property is not currently open for public access.

Falls Property – The uniqueness of the ‘land between’

On paper, it’s known simply as the Falls Property. And Bruce Falls admits that to the casual passerby, there’s not a lot to differentiate the 178 acres or so from the vast tracts of land that surround it.

But Falls – with his wife Ann – have had almost half a century to scramble up and around the cliff ridges that jut from the hardwood forests below, to slog through the marshes and the beaver dams on its lowlands… they’ve explored its fens and ferns, its creeks and bogs. Given their credentials, it would be difficult to argue that there is a more thoroughly documented ecological setting in the Kawartha region.

It’s a knowledge that deserves to be preserved. The Kawartha Land Trust will see to that.

Falls is a former zoology professor at the University of Toronto, and was one of “a plucky band of naturalists” credited with creating the Nature Conservancy of Canada back in 1962. But he will tell you his knowledge of the Kawartha region was limited when he first stumbled across the property back in 1969.

“We had a cottage on a lake inland from Georgian Bay, but we were looking for something different… some place where we could practice.” Both Falls and his wife studied biology.

“A friend of ours encouraged us to look around, so we got in touch with real estate. We were looking for a property that was not too expensive, not too far from Toronto. But something with a lot of biodiversity.” He says it took a year or two to get the deal done, but it was exactly the piece of property they had envisioned.”

Located a little more than an hour north east of Peterborough, not far from Coe Hill, Falls says the property is fairly typical for the region. He describes it as “the land between”. To the south are the limestone planes of Peterborough County. To the north, there’s the exposed rock of the Canadian Shield. But the rock on his property is mostly marble, he says, and the landscape allows for some unique biodiversity.

Falls, a past president of the Federation of Ontario Naturalists, says the diversity of the landscape was a key factor in determining whether to purchase the property.

“It’s close to the Crowe River and there is a stream that runs through it. And it’s quite hilly. That’s one of the things that attracted us to it.” Falls says marshland covers about 25 acres of the property.

“One of the reasons we liked it is that it is so diverse.” It has some history to it as well. “It’s not ancient forest. It was farmed at one time and before the forest, there was logging. We have photographs that show large open fields.”

Documents dating back to 1884 show it was farmed at one time by family named Fitzsimmons. When the farming stopped around 1918, a lumberman by the name of William Purdy purchased it and, at least in part, planted what would be a small Christmas tree farm. There is a small cemetery across the road from the property where some of the Fitzsimmons family is interred.

When Bruce and Ann took possession, the remnants of an old farm house was still standing. There was a log cabin but much of it had fallen in, Falls says. It couldn’t be saved. One of his most fond memories occurred just a few years after their purchase, when the family pitched in and built a cabin of their own. “We had three teenaged kids at the time and they all pitched in. That was pretty exciting. We did it essentially in one month. We still use it as our headquarters for exploring the property.”

Their kids are grown now and Ann says they’re not able to follow up in their parents’ activities on the land. After a little soul searching, they decided together that the benefits of preserving the property in its natural state outweighed any notion to sell it to someone else.

“We’ve done a lot of inventory, and we just felt after all that’s been done to document it, (the donation) made sense. I mean, what are you going to do? Sell it to someone who will just have it logged again? People would forget about it and all our activity would be wasted. We just thought there must be some way to protect it.”

Falls initially contacted the Nature Conservancy of Canada, and was directed to the Kawartha Heritage Conservancy – now known as the Kawartha Land Trust. Under the agreement between the KLT and the Falls family, they can use it at any time in the lifetime, and their children have first option on any rental opportunity.

“It’s a comfort really,” Falls says. “We were very keen to see it preserved and we think there should be more protected land in Ontario. The diversity should be protected. There is satisfaction in what the land trust is able to do.”