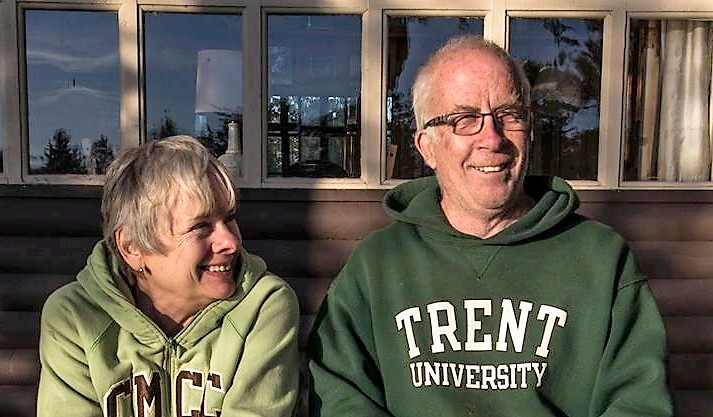 It all started with a chance meeting with Mike Hendren at a breakfast meeting in Toronto where Bob Taylor-Vaisey offered to do a records audit for KLT.

Bob’s association with KLT has now evolved into his being the chair of the Land Securement Committee. He says that what makes the KLT special for him is the way its staff and volunteers connect with the land. “Protect the land you love” is not just a slogan for them,” he says. “It is a way of life.”

Bob was born and raised in Peterborough, and he and his wife, Anne, have three grown children. He was educated at Trent University (B.A. (Hons) in History and Languages, followed by an M.A. in Mediaeval History. He followed this up at Cambridge University and the University of Toronto pursuing his doctorate in mediaeval law.

After finishing university he published a book called “Ontario’s Heritage: A Guide to Archival Resources”, an inventory of archival records in Peterborough, Victoria and Haliburton Counties. He then took a position as Assistant Archivist for the University of Toronto Archives, and later became corporate archivist and senior document management consultant, Imperial Oil, as ExxonMobil’s expert on records retention.

Although Bob describes himself as “retired (kind of)” he would have to be retired to find time for all the volunteering that he does. Along with his work at KLT, he’s also involved with the Heritage Preservation Committee for the Municipality of Trent Lakes, he’s on the County of Peterborough Task Force on the Future of Archives in Peterborough County, is vice-president of the Cavendish Community Ratepayers Association Inc., and the Guildwood Village Community Association. (whew!)

Bob says the inspiration for his volunteering comes from his parents. “They were both outstanding volunteers in Peterborough,” he said. “My father hooked me into volunteerism when I was 19 as the student player rep on the Board of the Peterborough Symphony Orchestra—he taught me to stand up for what I thought was right and my mother demonstrated to me the unselfish benefits of helping others.”

“Bob is the most dedicated volunteer I have ever known, next to his parents, that is. He grew up in a culture of serving others,” Anne Taylor-Vaisey.

Bob says the one thing people may be surprised to know about him is that his swims like an anchor. Perhaps that’s why being chair of the Land Securement Committee is such a good fit for him—no swimming involved!

“Work for a cause not the applause” is a motto that I have witnessed Bob to live by since we first met two years ago. I have worked with Bob at Kawartha Land Trust and as a fellow volunteer on Trent University’s Alumni Council, he has shown exemplary dedication, willingness and passion for believing in a cause and standing by it. ‘A man that never sleeps’, is what I call him, as he is always volunteering his time to the many organizations that he is committed to. On behalf of the entire KLT team we thank Bob for his tireless efforts he gives to the organization,” Jessica Rogers, Executive Assistant, Kawartha Land Trust.

At Kawartha Land Trust our volunteers are the heart and soul of what we do. We feel very fortunate to have a large, enthusiastic and dedicated volunteer base with a range of talents who give us the gift of their time to help us accomplish our land securement and stewardship goals for the Kawarthas and engage the community in support of this work.

In 2016, over 90 KLT volunteers, who care about protecting important natural areas in the Kawarthas gave over 6,000 hours of their time to help care for and protect the land you love!

As we continue to grow, so does our need for volunteers to help with our many projects.